In 1957 a first industrial production of polypropylene was carried out. Due to its excellent resistance to heat, pressure and corrosion, it became the material preferred by users. At the end of the 70s, polypropylene was considered the material of the hot and cold water supply pipes of the future. This was the first generation of polypropylene, which was named PP-H, short for homo-polypropylene. However, although it had excellent resistance to heat (<110 ° C) and pressure (MRS = 10 MPa), its poor resistance to impact at low temperatures did not make it suitable for the construction of hot and cold water supply pipes.

For this reason, an attempt was made to improve the impact resistance at low temperature by modifying PP-H, giving rise to the second generation of polypropylene, which was obtained by adding a certain amount of vinyl monomer during the polymerization process of polypropylene. It was named PP-B or PP-H, which is the abbreviation for copolymerized polypropylene block. Although PP-B was a breakthrough in low temperature impact resistance, on the contrary, its resistance to heat was reduced. PP-B could only be used in cold water pipes or in hot water pipes in low pressure conditions.

In the late 1980s, a European petrochemical company broke the traditional process (liquid phase) of polymerization of polypropylene and adopted advanced polymerization technology (gas phase), which synthesized a random copolymer of propylene and ethylene. The copolymer was called random polypropylene (PP-R), with an ethylene content of less than 5%, which is randomly distributed in the polypropylene molecular chain. This PP-R, which is created through the new polymerization process that takes advantage of PP-H's heat resistance and low-temperature impact properties of PP-B, is suitable for the manufacture of piping systems for supply. hot and cold water inside buildings. 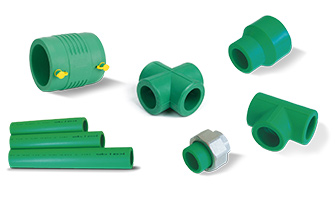 Catalogue (PDF)
Price list (PDF)
Certificate (PDF)
Our products
We inform you that we use first- and third-party cookies in order to improve the performance of the page and for analytical and advertising purposes. If you want more information or would like to manage them, please go to the
Cookie Settings.
I ACCEPT COOKIES
WE CARE ABOUT YOUR PRIVACY
You can set your consent preferences and determine how you want your data to be used according to the purposes detailed below.
Uncheck all ACCEPT ALL
These cookies are necessary for the basic operation of the website and, therefore, are always active. They include cookies that remember the actions you make when browsing the website in a single session or, if requested, from session to session. They help in online shopping processes, in addition to providing assistance in security matters and in compliance with regulations.

Analytical cookies allow us to improve the web browsing experience and to provide the administrator with statistical information such as the number of visitors or how users use our platform.